Does Civilisation Lead to Fragmentation, or Collapse?

If civilisation is that which broadens society, within the framework of a social contract between people, (if you wish to dispute this definition then please see the previous posts: what is civilisation & what is it to be civilised) then what happens when society grows too big/civilised?

You could debate the extent to which civilisation is growing or shrinking (the sick society post seems to suggest that we may in fact be at the beginning of our decline). But if/when it is expanding, then this broadening of society seems doomed to lead towards societal fragmentation.

As civilisation has grown, we have built more complex identities & more complicated lives; we have explored far and wide; we have built bigger social networks than ever before; we have settled in more places; we have constructed more buildings, groups and works of art; and we have more commitments on what precious resources we have. How can we keep up with all of these developments?

In short, due you think civilisations come to ends in ‘Big Crunches’, when the gravitational forces that held civilisations together (e.g. ideologies, nationalism, religion etc) begin to crush the spirit of civilisation? Or do you think, like scientists currently think about the universe, that modern societies could continue to expand, until one day that one society has become ten, or twenty or more?

This question is in fact much more difficult than it seems. And you can see this by thinking about fallen civilisations from eras past. The ancient Sumerian civilisation (the civilisation which invented writing, and whose name means ‘land of the civilised kings’) collapsed under the strain of repeated invasions. The Mayan civilisation came to an end 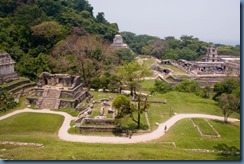 as a result of the Spanish invasion in the 16th century, due to war, disease, and a foreign civilisation determined to assert its own supremacy. The Khmer civilisation in modern Cambodia came to an end due largely to environmental changes. Ancient Rome fell as a result of repeated invasions, but over an incredibly long period of internal economic decay. All of these falls are caused by very pragmatic things: food resources, safety, environment and economics.

Are you still following? Good! Because almost all of the above ‘falls’ were in fact the falls of political and economic entities; and not civilisations! That one requires the other could be true, and should be the topic for another day. But that point aside, if civilisations are primarily about societies, then how much do those above examples really help? Was Roman civilisation expanding when it fell? Did it end up splitting into various smaller civilisations, all of which bore the mark of its ideas, art, music, writings and religion? Or was it in fact being pulled towards a ‘big crunch’, by entrenched ideas of aristocracy, hierarchy, militarism and hedonism? Did Mayan civilisation get destroyed by the Spanish? Or did its spread get temporarily halted, only to re-emerge and fragment into various different territories, such that signs of it can be seen today in Guatemala, Mexico and Belize?

Author and historian William R. Everdell once said that the rise and fall of civilizations is