We are bombarded with more information today than ever before. And we are enduring a period of shock in numerous ways; societal and economic changes are affecting everyone. One of the results is diversity, and an increasing number of identities per person (take how people assume different identities online for example). Is another result immaturity? In order to answer this question we must first define maturity.

In terms of the science, the brain reaches 90% of its adult size by the age of 6. And a second wave takes place in the years before puberty. During this time grey matter (areas of the brain responsible for processing information and storing memories) increases in size, particularly in the frontal lobe of the brain – as a result of an increase in the number of synaptic connections between nerve cells. Also around puberty however, a process begins in which connections that are not used or reinforced begin to wither (hence the “use-it-or-lose-it” hypothesis). This pruning, which begins around age 11 in girls and 12 in boys, continues into the early or mid-20s, particularly in the prefrontal cortex, an area associated with “higher” functions such as planning, reasoning, judgment, and impulse control. As Dr. Jay Giedd of the National Institute of Mental Health has said, the real cognitive advances come with paring down or reducing the number of synaptic connections. During adolescence, the amount of myelin, a fatty, insulating material that coats the axons of nerve cells—similar to the way insulation coats a wire—also increases, improving the nerve cells’ ability to conduct electrical signals and to function efficiently; this too continues into adulthood and occurs later in “higher” regions of the brain, such as the prefrontal cortex. 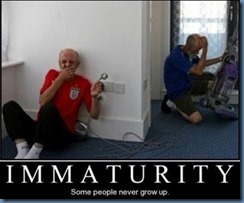 So this tells us why maturity is associated with puberty and adolescence. But of course we have all met immature adults. I’m not even going to claim to be particularly mature myself. I find the idea of permanent maturity to be closely associated with the word boring. Such a statement, you might think, could reflect the fact that maturity can only be judged subjectively, or relative to the society within which you live. Yet almost every major philosopher has had something to say about it, and in an objective way.

Cephalos, who discussed the ideas with Socrates, argued that decency and temperament are signs of maturity.

Kant argued that “laziness and cowardice are the reasons why so great a proportion of men, long after nature has released them from alien guidance (natura-liter maiorennes), nonetheless gladly remain in lifelong immaturity, and why it is so easy for others to establish themselves as their guardians. It is so easy to be immature. If I have a book to serve as my understanding, a pastor to serve as my conscience, a physician to determine my diet for me, and so on, I need not exert myself at all. I need not think, if only I can pay: others will readily undertake the irksome work for me.”

J.S.Mill argued that socio-economic traumas led to immaturity, which could perhaps explain the growing popularity of extremism in hard times. If a societal trauma led towards a lessened state of maturity, then to Mill the state would be justified in limiting liberties.

Neitzche argued that “a person’s maturity consists in having found again the seriousness one had as a child, at play.”

Freud argued that one’s maturities could be seen in their actions and fears, and as such said “a fear of weapons is a sign of retarded sexual and emotional maturity.”

Lord Brain argued that in the pursuit of maturity personal experiences far outweigh “any public account which science can give”.

Indeed these quotes are only the tip of the iceberg in terms of the number of different ideas that people have about the concept. Perhaps the most intriguing thing about them however, is that everyone judges maturity to be desirable. Yet as hinted at by Mill, immaturity could be argued to be a psychological coping mechanism. Indeed we often associate Multiple Personality Disorder with the word illness. But why do we do this? It’s essentially because MPD makes it more difficult to fit into modern society, where you need to retain the stability to hold a job, and family relations. But our ability to supress overly traumatised parts of our mind, and create new personalities, is one of the most fascinating and amazing capabilities of human mind. If a person with MPD had several non-mature personalities, would you think this a bad thing?

I would love to hear your thoughts to any aspect of this subject. But most of all, how would you define maturity? And do you agree with Mill that your right to freedom should rest on your level of maturity?